You can enjoy a free lunchtime pop-up jazz session in the Amphitheatre of the Sir Ian Wood Building on Friday 25th November from noon until 1.30pm.

One of Scotland’s longest established ‘same-personnel’ jazz quartets, JazzMain is about to celebrate its 13th year and the band will be bringing its blend of ‘Cool Jazz’ to RGU in fine fettle, having performed at the likes of The Bute Jazz festival, Lockerbie Jazz Festival and the Edinburgh Festival Fringe amongst so many other venues this year.

Fronted by tenor saxophonist Nick Gould, the quartet’s nucleus of Gould, pianist Steve Grossart and drummer, Kevin Dorrian were joined three years ago by Ayrshire-based bassist Iain Harkness and his influence was immediate apparent, bringing a fresh foundation to JazzMain’s expansive repertoire that defined that great 50s and 60s ‘Blue Note’ period – think Hank Mobley, Dexter Gordon, Art Blakey, George Coleman and Benny Golson – pop them in a blender…whisk it up…and you have the very essence of JazzMain. Of course, the quartet doesn’t stop there. It’s Jobim-inspired Latin/Bossa/Samba tunes are something to behold as is their superbly inventive playing of some timeless American Songbook classics.

Come along and enjoy a free lunchtime music performance on Tuesday 15th November from 12.00 – 1.00pm in the Sir Ian Wood Building Amphitheatre.

The Marian McLaughlin Trio, an experimental folk trio from the USA will stop off at RGU as part of their UK tour.

“She occupies time and territory that few people are capable of these days.”

Friday 11th March will be the penultimate pop up jazz session this academic year. Guitar Journey Duet will play 11.45-13.30 in the Amphitheatre of the SIWB, alternatively at the Blue Lamp on Thursday (10th) March.

Guitar Journey Duet – two of Europe’s leading acoustic players take you on a musical exploration of the guitar’s history from its origins in Spain and North Africa across Brazil, Cuba and Central America.

Guitar Journey Duet brings together two virtuosic acoustic players of vast experience, flair and musicality. Sardinian Giorgio Serci has the distinction of having worked with both Dr John and the Berlin Philharmonic, as well as jazz guitar master Martin Taylor, Jools Holland and Shirley Bassey, and for over a decade Jonny Phillips has led the Latin American-influenced Oriole, one of the most accomplished bands on the UK jazz scene, whose albums and live performances have consistently won extravagant critical praise.

Serci and Phillips have immersed themselves in the music of Spain, North Africa and the Americas, studying flamenco and the dance rhythms that carry Hispanic and Latin American melodies and together they transmit their passion for guitar music and the instrument itself with real feeling, beautiful musicianship and sincere melodic engagement with the audience.

Pop-up jazz is brought to you by the Cultural Animateur-in-Residence as part of Open House 2015. 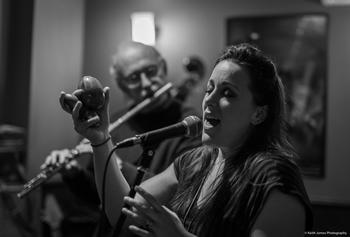 Described as a collection of some of the finest young jazz musicians in the country, fronted by an exceptional and versatile vocalist, the Kate Peters Quartet features Martin Longhawn on piano, Tim Carter on Drums, John Marley on bass.

Kate Peters and her band will be playing at The Blue Lamp on Thursday 25th February, alternatively see them here at our free pop-up lunchtime jazz session on Friday 26th February, noon-2pm, the Amphitheatre, SIWB.

Lunchtime jazz is brought to you by the Cultural Animateur-in-Residence as part of Open House 2015.

Jazz at RGU has an international flavour this week with Jyotsna Srikanth’s Bangalore Dreams . Jazz has long had a connection with India and cross-over could have been invented for one of the world’s most sought-after virtuosos of the Indian violin. Not only is Jyotsna Srikanth the queen of Carnatic music from Southern India, she is a leading exponent of Indian jazz and experimental music.

Jyotsna combines a deep understanding of traditional music with jazz and a contemporary touch, captivating audiences across the globe.

Playing at the Blue Lamp on Thursday why not see them for free here at RGU.

Come along and bring your lunch.

Pop-up lunchtime jazz is part of ‘Open House’ 2015, brought to you by the Cultural Animateur-in-Residence.

Here you will find the latest news on Resources, Services, and using your University Library.